The first step in a flavor improvement program starts with a simple question: what do people like and what’s in the varieties that people do like? In order to answer this question, we took a giant step back to “heirloom” tomatoes. There is absolutely no definition of the word “heirloom”. But most people accept that an heirloom is an old variety that predates the time of intensive commercial breeding. Most, though not all, are inbred (that is, they breed true to type). Contrary to popular belief, not all heirlooms taste good. We grew a broad cross-section of heirlooms, gave them to a panel of consumers and asked them to rate each variety. Don’t worry about the scale we used. It’s complicated. All you need to know is that the higher the score, the better it tasted. Note that there is some variation between years for varieties that were tested multiple times. All of these varieties were grown in our spring season at the University of Florida Suwanee River Research and Education Center in Live Oak, FL. Expect some variation in other parts of the country and from season to season. One can only hope that some of the really terrible varieties do better somewhere!

When we bite into a tomato, what our brains register as a "tomato" is actually a complex interaction between sugars (glucose and fructose), acids (citric, malic and ascorbic) and multiple volatile compounds. While several hundred volatiles have been identified in tomato, only about 15-20 actually impact our perception of the fruit. This is because most of these compounds fall below the odor threshold. This threshold is determined by both the concentration of the substance and our ability to detect it. Thus, a compound that is present in quite high levels that we detect poorly will not register. Conversely, a substance to which we are quite sensitive will be perceived in very low amounts. For an excellent and understandable explanation of this concept, see Baldwin et al. HortScience 35:1013-1022 (2000). Much work has gone into defining the "important" volatiles that together make up tomato flavor and the list provided below should be considered only an approximation. Odor thresholds vary markedly between individuals and can be greatly influenced by the way in which the volatile is presented. A list of the major volatiles, their concentrations and their characteristic odors follows:

Several of these volatiles (ß-ionone, ß-damascenone and 6-methyl-5-heptene-2-one) are produced by oxidative cleavage of carotenoids. Additional carotenoid-derived volatiles just below this threshold include geranyl acetone and pseudoionone. We have isolated a pair of closely related tomato carotenoid cleavage dioxygenases (CCDs) that cleave a wide range of carotenoid substrates at the 9,10 and 9’,10’ positions to release a variety of volatile compounds that are essential components of tomato flavor. These results provide a direct link between enzyme and volatile. 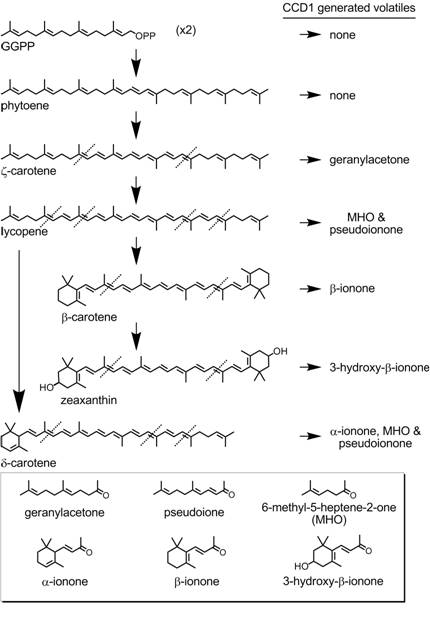 Several important flavor volatiles (methylsalicylate, phenylacetaldehyde, 2-phenylethanol and 1-nitro-2-phenethane) are derived from the shikimate pathway. We have isolated several of the genes responsible for synthesis of these important volatiles. The most important enzymes for the phenylalanine-derived volatiles are the aromatic amino acid decarboxylases (AADCs). They perform the first step in the pathway: conversion of phenylalanine to phenethylamine. For methylsalicylate, a methyltransferase, SAMT, is the most important enzyme.

One complicating factor that is not well understood involves conjugation of the flavor volatiles to sugars such as glucose. These glycosides are no longer volatile and therefore cannot contribute directly to flavor. 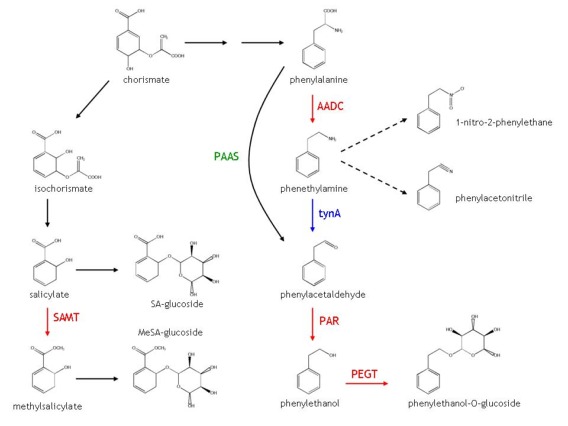